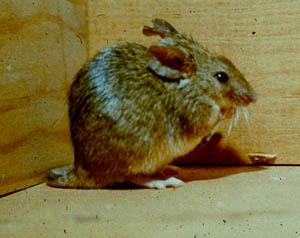 The House Mouse, and sometimes the Long-Tailed Field Mouse, seek the warmth and shelter of buildings for nesting sites and food. Their presence is usually detected from their dark-coloured droppings or damage to stored foods in the larder, packaging or woodwork.

Mice become sexually mature in eight to ten weeks, and a pair may produce eight litters, each of 16 young, in a year. Multiply those and you arrive at a horrifying number of mice! They climb well and can squeeze through very small gaps.

These nibbling nuisances have a compulsive need to gnaw in order to keep their incisor teeth worn down to a constant length. Electric cables, water and gas pipes, packaging and woodwork may all be seriously damaged by mice – many instances of electrical fires and floods have been attributed to them. They contaminate far more food than they consume and they are capable of carrying many diseases, particularly food poisoning. The average mouse deposits 70 droppings in 24 hours and urinates frequently to mark its territory.

Mice are erratic, sporadic feeders, nibbling at many sources of food rather than taking repeated meals from any one item. They do not need free water to drink as they normally obtain sufficient moisture from their food.

REMEDY: Because of their habits, traditional baiting techniques and trapping frequently do not work, and a combination of rodenticides may be necessary – in addition to mouse-proofing, as far as possible, all means of entry e.g. by blocking holes with wire wool embedded in quick-setting cement, or by fitting metal strips to damaged wooden doors.

For many years, the most widely used and effective rodenticide was warfarin. This is an anti-coagulant drug which prevents vital blood clotting. Mice feed on it, without suspicion of growing weaker, until they die. The disadvantage of warfarin-based baits is that they take several days to work and depend on repeated feeding by the mice.

In most urban areas of Britain, however, mice have now become resistant to warfarin. Alternative and effective, ready-to-use, proprietary mouse killers are available for household use. Other commercial rodenticides can be used by pest control contractors or local authority environmental health departments, including a powder that they pick up on their feet and fur.

An alternative to baits are break-back traps. They may catch the intruder if baited with nutty chocolate, raisins or similar attractive food and placed close to signs of mouse activity. Cheese, surprisingly is a comparatively poor mouse-baiter. Place traps close to, and at right angles to, walls so the treadle may be activated from either direction.