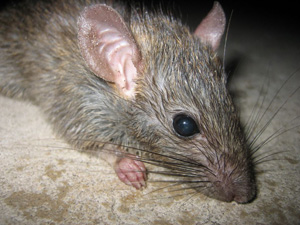 The rat has plagued man for thousands of years – literally plagued him, for the rat flea was responsible for the Black Death. There are two species of rat in Britain, Rattus norvegicus which is commonly known as the Brown Rat (below) and Rattus rattus which has the common names Black Rat or Ship Rat.

The Brown Rat is the larger, often weighing over half a kilo and measuring about 23cm, without counting the tail. It has a blunt muzzle, small hair-covered ears and a tail that is shorter than its body length. The Black Rat weighs only half as much and is slightly shorter. It has a pointed muzzle, large, almost hairless ears, a more slender body and a long thin tail that is longer than its body.

The Brown Rat is the commoner species and stays near ground level. The Black Rat still occurs in seaport towns and is a more agile climber, often entering the upper floors of buildings. It is possible to identify the species present from the different shaped droppings, footprints in dust (the Brown Rat is flat footed, the Black Rat runs on its toes) and presence of tail swipes. In towns, Brown Rats often live in sewers but in the countryside there is a constant background population in fields and hedges.

Both species breed rapidly and become sexually mature in about three months. Each female may produce from three to 12 litters of between six and eight young in a year.

Brown rats will burrow underground or into suitably soft material to make a nest. Refuse tips, loose soil under sheds and earth banks are all likely sites and chewed paper, straw or insulation material may be incorporated as nest material. The young are born blind, helpless and naked and depend on their mother for food for about three weeks before they are sufficiently developed to take solid food.

Rats, like mice, need to gnaw to keep their constantly growing incisor teeth worn down. They damage woodwork, plastic and lead pipes and will sometimes strip insulation from electrical cables by their gnawing.

Rats will hoard food for future consumption and numerous cases of “theft” have been found to be the work of rats. They feed mostly at night and an average rat will eat 50g of food a day.

Creatures of habit, rats leave regular “runs” to and from feeding areas. They can be a menace to poultry, eating eggs, chicks and animal feed.

They are also capable of spreading many diseases from their filthy surroundings in sewers or refuse tips and can transmit food poisoning, Weil’s disease (from which about ten people and a number of dogs die each year in the UK), murine typhus, rat bite fever, trichinosis and other diseases. They are probable carriers of foot and mouth disease on farms. They contaminate more food than they consume and their urine can pollute stagnant water.

REMEDY: As far as possible, eliminate harbourages such as gaps under sheds, loose piles of wood or neglected weed patches. Do not encourage rats by leaving scraps of food out of doors. If you feed garden birds, use a bird table or feeder basket.

Poison rats with a proprietary, ready-mixed bait, usually available in handy sachets to be placed near signs of infestation.

For serious or persistent rat infestation, call a pest control servicing company or your local authority environmental health department. They will have at their disposal a range of rodenticide products which are not available to the householder.